This page answers the question "SHOULD I USE A CATALYTIC OR NON CATALYTIC WOOD STOVE?"

SHOULD I USE A CATALYTIC OR NON CATALYTIC WOOD STOVE?

It is true that in most EPA testing, catalytic stoves are about 10% more efficient than the non cat stoves, but this does not necessarily give an entirely accurate picture. The EPA emissions tests and efficiency listings are based on the average of several different test burns at low, medium, and high. Also, a special crib of wood is used: 2"x4" wood for small stoves; mixed "2X4" and 4"x4" for larger stoves; and all 4"x4" for the largest stoves. This is done for consistency in burning between the different stoves. If you always burn the stove on a very high burn the difference in efficiency between catalytic and non catalytic stoves will be less than 10%. If you usually burn the stove on medium or low the difference will be more than 10%.

AT THE LOW BURN

The Myth about burning a Catalytic stove Hot!

For years many people have criticized catalytic stoves saying such thing as: They must be burnt hot to keep the catalyst active. This is entirely false. It is true that a catalyst does not become active (lit off) until it reached 400f to 450f. However, in a properly designed stove it is almost impossible to build a fire without this condition occurring. After the catalyst is lit off (reaches a temperature of around 450f) it can burn room temperature smoke if there is a sufficient amount of smoke and 02. The catalyst temperature remains over 450, even if the fire box temperature drops very low because it is creating its own heat by burning the unburned gasses in the catalyst. It will continue to operate as long as the smoldering wood continues to smoke and there is sufficient 02 to burn all the hydrocarbons.

So what stove should I buy?

What about maintenance of the catalytic stove?

It is true that a catalyst must be replaced about every six years depending on how many hours the stove is burnt each year. Replacement catalyst are between $50.00 and $200.00 Also all catalytic manufacturer offer a 6 year pro rated warranty. So in the worst case it may cost you about $35.00 per year more to operate a catalytic stove. The increased efficiency will more than offset this cost if the stove is used for heating. Maintenance involves taking the catalyst out in the spring of the year, vacuuming the cells with a vacuum cleaner, (NEVER AN AIR HOSE) and storing it in a dry place until the next year. In the Sierra stoves, the catalyst can be easily removed by removing two or 4 nuts. It is about a 5 minute operation. The catalyst I am now using was purchased in March of 1987 and it is still fully operational. The catalyst will work equally on any wood, green, aged, or rotten. The only caution is never burn painted or treated wood in a stove with a catalyst. The chemicals in treated wood (Arsenic) or the chemicals in paint will damage the catalyst. Also if the stove you are using can burn coal, the catalyst should be removed before burning coal -- the sulfur in coal will coat the catalyst and shorten its life.

Give Lou a call to learn how to get the most efficiency and least emissions (creosote), out of your catalytic stove or appliance. Learn how to monitor your catalyst. Get tips on burning coal etc.

Lou's advise is available by phone. With 20 years of experience in the Wood Heating, and Wood Stove Design industry, Lou can answer your specific questions. As an independent, and working for industry leaders such as Riteway Manufacturing in association with Corning Glass, Lou was involved in the early experimentation and development of Palladium coated catalytic Wood Stove designs. His background includes assisting Sierra Manufacturing with designing, and testing models. Louis did most of the design and pre-testing of the "Sierra 8000". In the first stage of the EPA teating in 1987 the Sierra 8000 and the "Blaze King" were tied for second place as the cleanest stove tested at the time. The "Sierra 8000" had a particulate emission of 1.4 grams per hour compared with 100 grams per hour in many non-catalytic stoves. Lou traveled throughout the country assisting industry dealers with technical problem solving and innovations to maximize consumer use and customer service. Lou also has extensive experience with residential Coal Burning applications; both Anthracite and Bituminous. You may be suprised to learn that biomass (Fresh Horse Poop) can be effectivly burnt in some catalytic appliances.

Louis is available for telephone consultations for $10 for a 20 minute phone call. This is sufficient to address most inquiries. Start by calling Louis at (724)954-3558. If we are not avaliable, leave your name, number and time to call. We will try to return your call as you direct. You can also email us giving us your number and a time to call.

The "Buy Now" button below is a convienent way to pay with pay pal or a credit card. Do not pay or enter credit until after we have talked with you. You can return to this page to make payment. If you request we will invoice you for the service. For those in countries other than the United States, if you have Skype, look up louies39 under "search for skype users" and send us a message to add you to our skipe contact list. Make sure you include a time for us to contact you US eastern standard time. We will attempt to contact you close to the time requested. Do not purchase credit until we make contact. If you request we will bill you for the service. Note: English is the only language we are fluent in.

Thanks for taking the time to visit this page. 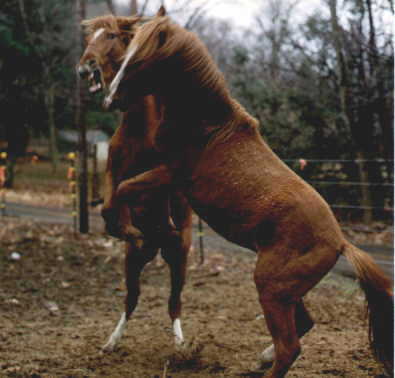 To see a short video of Uno de Mingo play his guitar, click on this text or the picture of Uno and his brother Cody at play. To order a CD with several training videos of Uno, click on the Buy Now Button. You can call us at (724) 954-3558. The CDs are $7.95 + $2.25 shipping, 6% PA sales tax is added to all orders. Mail a check or money order to Dime Software, 302 Holly Road, Adrian PA 16210. Be sure to include your shipping address and phone number. This CD makes a perfect gift for children and horse lovers. There is not any computer editing to the videos -- Uno really plays the guitar and appears to enjoy playing for the sound (I do not honestly think we can call it music). He has been playing his guitar for about 7 years and likes to have an audience when he plays.

Return to our home page.